A lmost everything is new for the Bark River-Harris Broncos this season: A new coach, a new cast of players and a new division.

The coach is BR-H grad and long-time resident Marc Zawacki. The players are six seniors that didn’t see significant varsity time last season, and the division is Division 3 — a change for a team that has spent every season in Class D.

The Broncos have their work cut out for them no matter how you look at things, but Zawacki is ready for the challenge, even if it came a little sooner than expected. 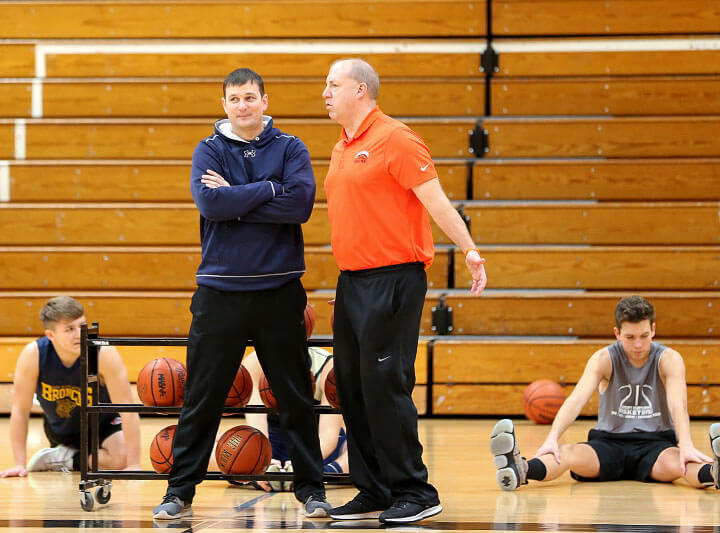 Marc Zawacki, left, is attempting to rebuild a winning tradition at Bark River-Harris.

“I coached JV for two years and then this position opened up,” he said. “I didn’t get my feet really wet per se — just a little bit — but I could either make the move now or wait. In a perfect ideal world I would have liked to try some different schemes and things at the JV level, but this way I can implement a program that will best benefit these young players and future players as well.”

The Broncos may be the youngest, oldest team in the UP. Age-wise they can be considered old, with seven seniors on the roster, but when it comes to experience, they are youthful.

Hunter Debelak is the only player on the roster to start at the varsity level last season, and no one else logged significant minutes. Zawacki will rely on Debelak to lead the inexperienced Broncos.

“He is a crafty player who can create around the rim,” Zawacki said. “He does a lot of little things, so we will be looking to him.”

But the jump from JV to varsity is a significant one, and a single player can’t take on everything himself. So, the Broncos will need something else new: a different definition of success.

“We certainly are going to go through growing pains, so you have to look at what it means to have success,” Zawacki said. “What is going to be a successful season for us? The kids that are coming in are working hard and they have a positive attitude. To put a number on things, we can’t. But we are going to try and get better each game and learn from the last game. Hopefully, at the end of the season, come tournament time, we are right where we need to be.”

Of course, that will be in a different division, which presents challenges of its own. BR-H has always been a Class D school, but now the Broncos will be playing in Division 3, the equivalent of what used to be Class C. The Broncos also won’t come across many of their postseason opponents during the regular season, making preparation more challenging. 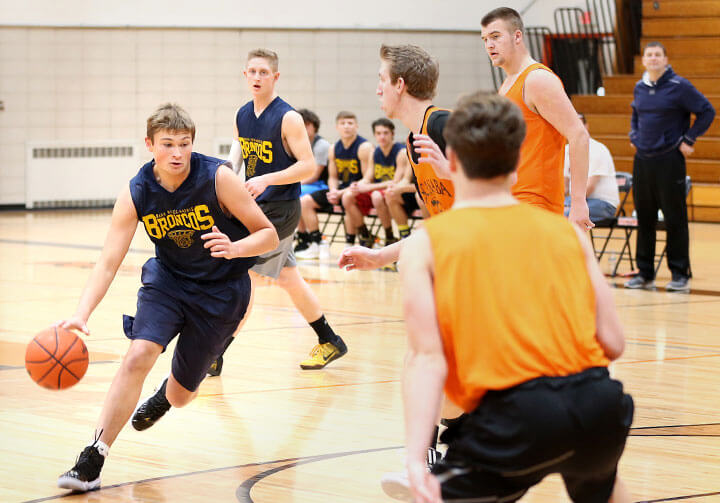 Carter Zawacki drives against Escanaba during a scrimmage.

That challenge goes to Zawacki, who will have to become good at scouting. In today’s game, film can be found on most teams, which is both an advantage and a disadvantage. There are no secret schemes or surprise defenses, instead, it comes down to fundamental basketball.

“With the technology it makes it difficult to surprise anyone, but if you are doing those little things you will prove yourself when you show up at game time,” Zawacki said.

He may be a new coach, but Zawacki knows all about the Broncos. He’s lived through plenty of seasons, some good and some bad. And he and his wife, both BR-H grads, couldn’t escape the program if they tried. After college, the only thing they tried to do was get back to their hometown.

“We went away to college, but it was a no-brainer when we decided to have a family where we were going to raise our family,” Zawacki said. “It wasn’t a question. We are Broncos through and through. There wasn’t another option really, for either one of us.”

Zawacki loves the history of Bark-River Harris. He loves looking at a roster full of names he recognizes, “the hometown names” as he calls them. He loves that people from Bark River stay in Bark River, and now, he gets to put his own stamp on their boys basketball program.

“This is a pretty cool experience. I graduated here in 1994 and I feel like we have a pretty long history of good quality teams coming through here,” he said. “I remember the 92-93 years were good, and then the 2000s. I want to build on that, but we also have to have our own program. We have to rejuvenate the program.”