A fter last season’s dramatic and controversial ending in the Division 3 state final, it’s not an exaggeration to say Iron Mountain will have the state’s attention in 2019-20. There will be those interested in how the Mountaineers bounce back on their revenge tour after having what many feel was a state title robbed from them, and others who will track the progress of Marcus Johnson and Foster Wonders after each solidified their spots as two of the premier players in the state.

Charlie Gerhard and Jaden Vicenzi will certainly be missed, but with the return of Tony Feira and Jake Dumais — in addition to newcomers from an unbeaten JV team — Iron Mountain is the favorite in our Way-Too-Early Division 1-3 boys poll. Here’s the rest. 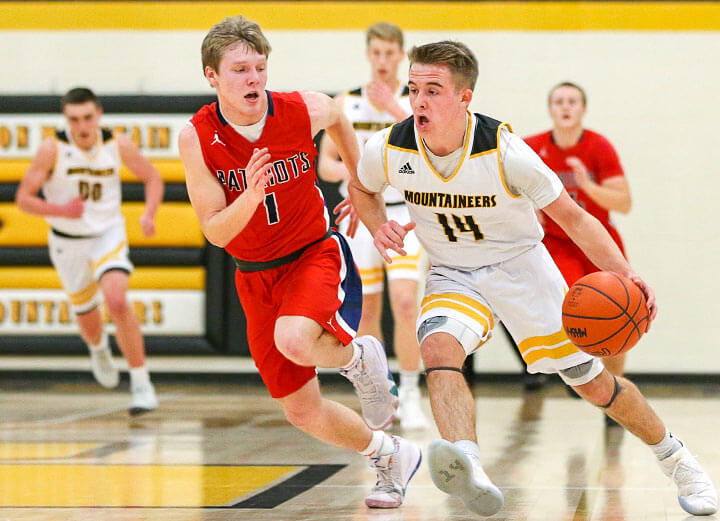 Besides the No. 2 team on this list, it’s hard to envision anyone challenging the Mountaineers in the UP next season. Gone are the established talents such as Gladstone’s Reece Castor and Calumet’s Matt Ojala, who are now at Northern Michigan and Michigan Tech, and could lead their teams to competitive affairs with Iron Mountain thanks to their talents. Expect plenty of blowouts for the Mountaineers in 2019-20.

The regular season will allow Iron Mountain to work on replacing the team’s previous defensive stopper, Vicenzi, and the strong presence Gerhard provided on the glass. Dumais already has key experience in Iron Mountain’s frontcourt and should be a natural fit; he scored three points and recorded four rebounds in the team’s 60-57 semifinal win over Detroit Edison and looked comfortable against Edison’s size and athleticism.

How Iron Mountain will replace Vicenzi remains to be seen. The combination of his soccer background and hard-nosed defensive mentality made him one of the premier stoppers in the UP, and he could routinely be relied on to limit the other team’s best player. In addition to his defensive work, Vicenzi also delivered on the offensive end in critical moments. Against Negaunee in the regional semifinal, he took advantage of Negaunee’s defensive focus on Wonders and Johnson to score 17 points while making all five of his 3-point attempts as Johnson and Wonders were limited to a combined 26 points. Without Vicenzi’s offense on that night, the Mountaineers might not make the state finals.

Still, those questions might not matter because of how good Wonders (23.9 points per game) and Johnson (23.1 points) are. Against some of the premier athletes downstate, they managed to score against length, size and an overwhelming amount of physicality. Next year should be no different, especially with the two getting another year of growing into their bodies.

Wonders is already coming off a season where he was named Mr. UP Basketball and has spent the summer playing on the Nike EYBL — one of the top AAU circuits in the country. In the past week, he’s received scholarship offers from Oakland, Toledo and Miami (Ohio) to go with his offers from Western Michigan, UW-Milwaukee and Central Michigan.

His skill set has always been of the most advanced in the UP, but it appears he’s developed a quicker first step after focusing on his athleticism this spring/summer.

Opposing coaches label Johnson as “simply a winner, willing to do whatever it takes,” and he proved he was a gamer all throughout Iron Mountain’s run to the state title game. And as the team’s emotional leader, it’ll be worth watching to see how he leads Iron Mountain on its 2019-20 revenge tour.

Negaunee's Jason Waterman led the UP with a 52% 3-point shooting mark from a season ago.

Let me be clear: There is no debating the No. 1 spot on this list. It is clearly Iron Mountain and any other answer would be foolish. But, I would be remiss if I didn’t say that I believe the gap between these two teams is tad closer than last year, which is only natural with the Miners returning four of five starters. All the other major contributors are back for another season.

Waterman converted 52 percent of his 3s last season and averaged 16 points a game, making him the favorite to be the best pure shooter in the UP once again. Lindberg is another outside threat who shined last season, and DuShane’s defense in the regional semifinal against Iron Mountain was key for the Miners in keeping it close; he bodied Wonders throughout the night and held him to 12 points. He could stake a claim as the best defender in the UP in 2019-20.

It’s no secret that Negaunee is at its best when Sager plays well. As a junior, he averaged 12.7 points and was second in the UP in assists with 6.7 per game. His ability to create off the dribble and attack the rim sets up Waterman and Lindberg for open looks, or DuShane for drop-off dumps under the basket for layups. Covering him last season, his skill set is reminiscent of where Calumet’s Matt Ojala was his junior year. Few could stay in front of either guy, and both have some of the best ball-handling skills in the UP. Each had their go-to move, with Ojala relying on a left-to-right between the legs, hesitation and go, while Sager has a right-to-left crossover he utilizes to shake his defender. Even their 3-point shots were similar in that they’re capable shooters from the perimeter, but you wouldn’t consider them knockdown shooters.

After Ojala’s junior season, he made the jump his senior year and earned All-UP Dream Team honors following a season where he averaged 19.3 points, 8.3 assists and 7.1 rebounds. Sager won’t need to put up those type of numbers for the Miners to be successful, but a similar type of leap in production shouldn’t be all that surprising.

The Miners are the best chance at handing Iron Mountain a loss, making the two regular-season contests must-see affairs. Right now, the two are favorites to meet again in another regional semifinal; this time, in Escanaba. 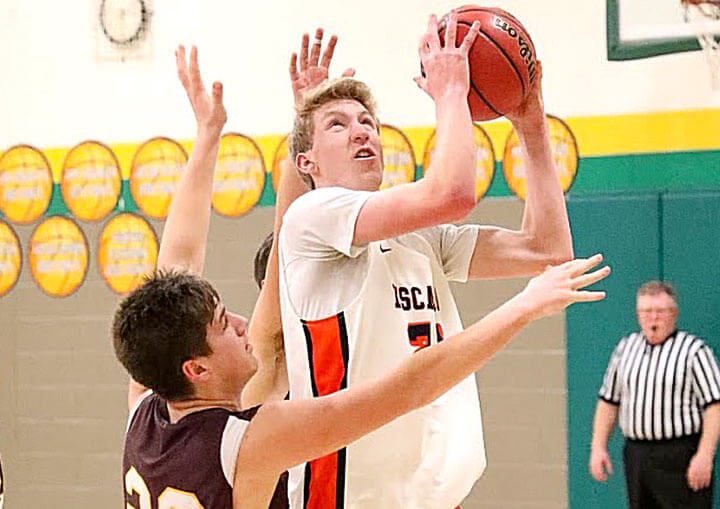 Besides Wonders, Johnson, Sager and Waterman, along with Houghton’s Brad Sirard, there are no returning players from last season’s Division 1-3 All-UP team. Meaning the rest of these divisions will be led by newcomers or players who are set to take on increased roles. One of those is junior Carter Hudson, who at 6-foot-7 with an all-around skill set, will have a case as the UP’s best big. Peyton Fedell also started for last season’s Escanaba team that reached the regional finals, and both Hudson (12) and Fedell (10) reached double figures in scoring during the district final against rival Gladstone.

The Eskymos will also have an influx of talent from last season’s JV team that claimed the GNC title. Even without Hudson, the new-look Eskymos managed to take first at the Carney-Nadeau Summer Team Camp in July. 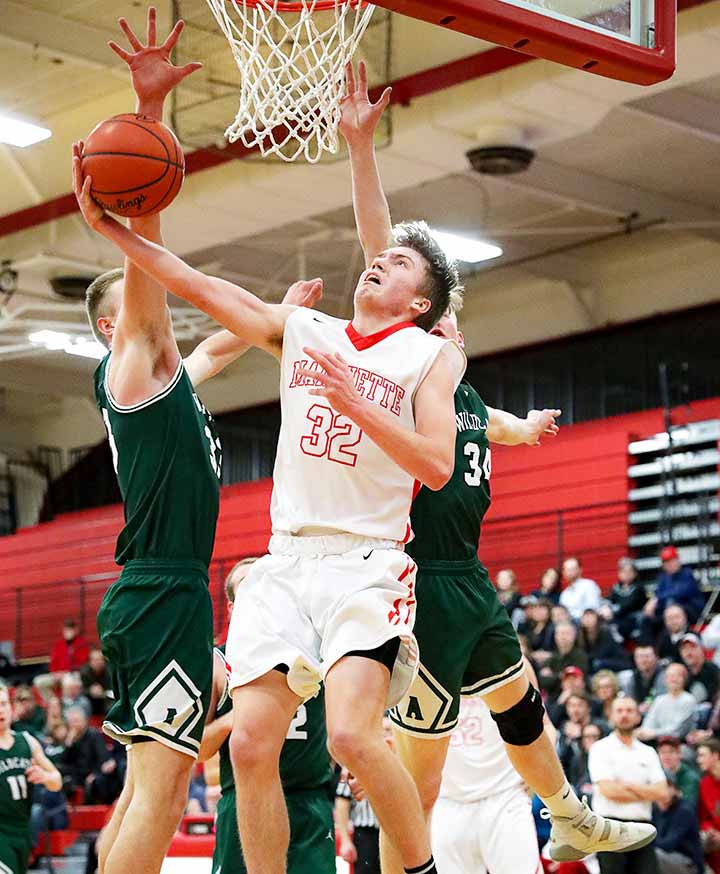 After its senior core graduated, Marquette's Drew Wyble is one of the Redmen's primary returners for 2019-20.

The Redmen are going through a roster overhaul as much as anyone after losing all five of their starters from last season. Luke Ogea was expected to handle the scoring and was projected as a top-five player in the UP, but he decided to forego his senior year at Marquette to pursue a music education at Interlochen Center for the Arts. That leaves senior Drew Wyble as the top returner from last season’s team.

Similar to Escanaba, Marquette had one of the best JV teams in the GNC and the two schools went to double-overtime in each contest against each other. In the limited JV action I saw last season, Marquette’s Kameron Karp impressed on the offensive end. His jumper mechanics are sound and he showcased the ability to get to the rim and finish with either hand. Karp also was a part of Marquette’s postseason run to the regional semifinals, and those practices and experiences with the team could help transition to the varsity level. I would expect him to carry the offensive load for Marquette this season.

Houghton's Brad Sirard averaged 21.2 points and 10.2 rebounds last season. The Gremlins' success in 2019-20 will be dictated by the production of their supporting cast.

There’s too much uncertainty for me to get behind a team to put them in at the No. 5 spot. Houghton’s Brad Sirard (21.2 points, 10.2 rebounds last season and committed to Michigan Tech) could lead the UP in scoring next year, but is there enough of a supporting class around him to give the Gremlins the No. 5 spot?

The usual suspects in the poll, such as Ishpeming, Calumet or Westwood, all lost their top scorers from a season ago and will have new coaches this season. And Gladstone and Kingsford each lost their program’s all-time leading scorers in Castor and Tyler Beauchamp.

Compared to last season, there are less established cores and players. It could leave Division 1-3 top-heavy in 2019-20.

If you listened to a podcast or have followed Eden and me long enough, you’re aware of how plenty of our conversations during a season revolve around high school basketball. Teams, players and storylines are regularly discussed, and for the most part, we tend to agree. But of course, there have been points of contention — moments where my stubbornness...

All-UP selections to be impacted by suspended play

If you despise the All-UP selections for their occasional reliance on stats, then do I have some bad news for you. Due to the unique circumstances facing our society, the format for the 2019-20 All-UP basketball selections will be changing. The Upper Peninsula Sportswriters and Sportscasters Association will not meet to make the annual selections, but instead, the preliminary plan...

What to watch for in boys district play

So, a confession to start this column. For the first time in eight years as a sports reporter in the UP, I won’t be covering a boys district-opening game tonight. My day job is hosting one of its biggest events of the year, and it’s set to take place from 5 p.m. to 7 p.m. I just wanted to let...