T yler Sundling is riding high these days. Just over a week ago, he was the hero for the Rapid River Rockets’ first eight-person football state title. Sundling scored two touchdowns and rushed for over 100 yards in the championship game against Onekama. Now in his junior season, Sundling will officially take command of the Rockets basketball team.

Sundling has enjoyed much success in his athletic career at Rapid River. The football title was only the tip of the iceberg. As a freshman, Sundling was a welcome addition to a talented Rockets’ starting five. Rapid River played in a regional final in that 2016 season and could have gone farther if not for the juggernaut that was North Central, en route to the Jets’ third straight Class D state title. Sundling scored 25 points in that game, staring down Jason Whitens, a player who meant as much to North Central, as Sundling now means to Rapid River.

Rockets’ coach Rich Poma knows he has a talented, but also young and inexperienced team this year, after graduating five from last season. But having a player of Sundling’s skill at the point puts him more at ease. 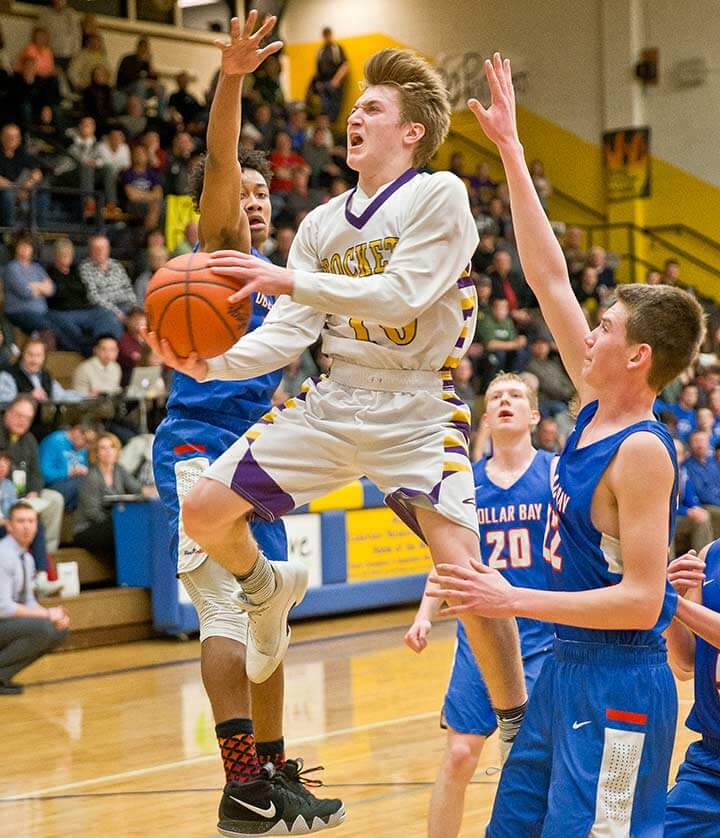 “Tyler’s been kind of our main guy. The point guard position is your quarterback and he does a great job,” Poma said.

As a Rockets’ alumnus himself, Poma knows the history. It’s hard to ignore the framed jersey’s of Sara Boyer and Derek Pistulka as you walk down the halls at Rapid River. Pistulka and Christian Harris, two of the greatest players ever at Rapid River, and teammates at that, were a fun bunch. They were talented and versatile and racked up points like a pinball machine. Harris a relentless guard, and Pistulka a punishing forward.

Poma sees Sundling as being in the conversation as one of the greatest to play on Rapid River’s court, a lineage that yes, includes even Poma himself.

“We’ve had some great shooters come through here,” Poma said. “Sara Boyer was a great point guard, great shooter, and an unbelievable leader. You’ve got Christian Harris and Derek Pistulka, the Larabie boys years back.

“I think each one of them brings something different to the table. The Larabies were all shooters. Tyler brings a shooting aspect with the way Christian Harris could finish. He can defend like Christian, and he’s just got a bigger frame than Christian ever did, so it’s quite a dynamic.”

No doubt Pistulka and Harris were talented, yet their teams at Rapid River had something missing. They were never able to get to the next level that great teams reach. Sundling’s Rockets have made it farther in the tournament than Pistulka’s and Harris’ teams ever did, and the key is chemistry. The kind of chemistry that only comes from growing up together.

Sundling’s first two teams were talented — and he relishes the taste of success he got with them — but he is most excited about his current team.

“I mean, last year we had a lot of skills. We had Cameron (Willemsen), Logan (Hardwick), and Luke (Gustafson)…” he begins, but then pauses for a moment.

“I think we were just being cocky last year. We didn’t play as a team. I think this year we have a lot more team chemistry and play well together.”

Chemistry can be hard to manufacture. It’s relatively easy to look at a team and determine if it was assembled at the high school level, or grown over time. Sometimes talent begets time, but more often than not the best teams know each other inside and out. Sundling says this version of the Rockets’ has the same mindset. 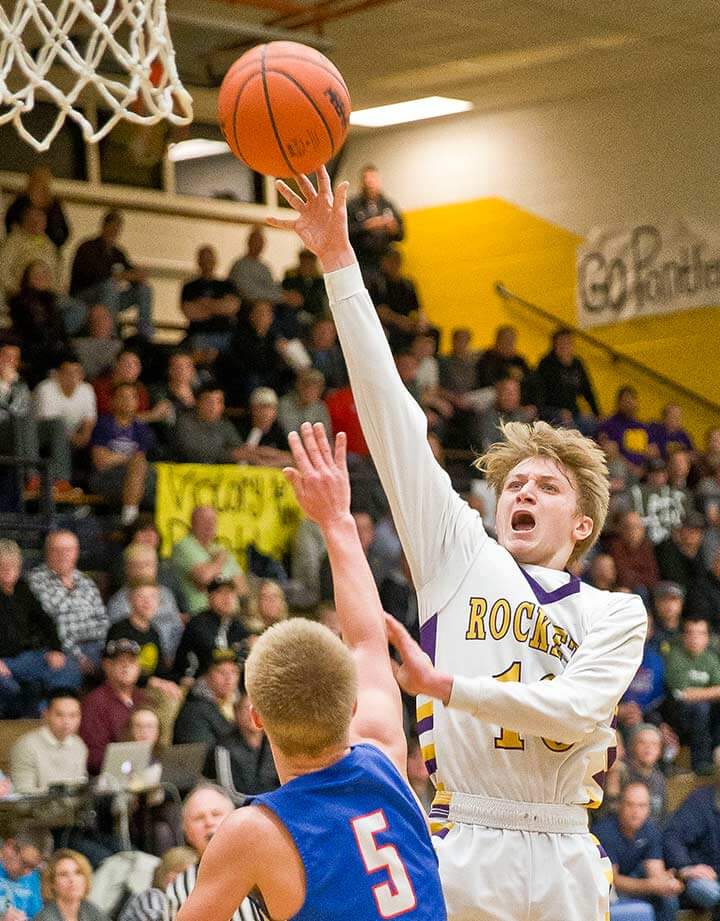 “We push each other all the time in practice and hopefully that shows in games, and throughout the season. This past summer is the hardest we’ve worked in the weight room, in the gym. Hopefully, we can carry on and win another district.”

Sundling averaged a steady 11.1 points per game last season as he was in more of a distributor role with talented two and three-year varsity starters around him. This year that may change some, at least early on, as he settles into a larger role. But it’s all been building, and it excites Poma who has seen his star point guard grow within the system.

“Tyler is beyond his years,” Poma said. “I remember seeing him as an eighth-grader at Big Bay for a little while and he opened my eyes up quite a bit. We played them once and I watched the JV game; he was on the JV, and then we played our varsity game. We got done at 9 o’clock or whatever it was, and he was back out there on the court in practice gear shooting around afterward.

This will be Poma’s sixth season leading the Rockets; a career that began rocky but has since flourished. This year will be a special one for Poma as he will have the first team he’s overseen come up from middle school to present.

“I feel good,” Poma said. “All these guys know what we expect from them, all the little intricacies in terms of defensive foot positioning and how to block out. Just a lot of those little things that you really have to spend a lot of time on when you start developing a program are already there, so it makes it easier on us to put plays in and tweak those situational game-type things.”

Sundling is a dual-sport athlete, but his love for basketball was fostered at a young age under the sibling competitiveness and tutelage from his older brother Lucas.

“Sixth-grade year, I got to play with my brother Lucas who was in eighth grade. We won the conference trophy,” Sundling said with a smile.

Poma knows having an older sibling who can show you the way can’t be discounted.

“Anytime you’ve got a brother that’s two years older than you, that you’re constantly competing with, that’s a big drive,” Poma said.

“You know I have a brother who’s five years older than me, that always pushed me. I know those two are the ultimate competitors in practice.”

Sundling looks up to former Phoenix Suns and Lakers point guard Steve Nash, and fashions his game like the 6-3 Canadian who was a two-time MVP.

“I like to pass first, get it to the open guy, but if I have to, take the open shot,” Sundling said.

Of course, Sundling’s words should be echoed by most point guards, as putting the team before individual success is admirable and necessary for teams to thrive.

Tyler mentioned the cockiness of previous years, but as the slightly older Sundling recollected his thoughts it was clear this is a more focused, yet also unimpeded player. Sundling just won a state title. He’s going to be looked to as the leader of this team, but the accolades don’t faze him. Sundling is just excited to play what will certainly be one of the more foreboding Division 4 schedules.

The Skyline Central conference is always tough, but the Rockets also play Division 2 Escanaba — a true measuring stick for any school.

“Oh man, there’s Munising, Esky, North Central for sure, and Carney,” Sundling rattled off the top contenders the Rockets will face. But Sundling and Poma feel good nonetheless. Division 4 appears to be anyone’s for the taking, and Rapid River is positioned to be right in the mix come tournament time.

“I think we’re right up there. We lost five guys. Some teams are going to be restructuring, and we’re one of them,” Poma said. “But it’s gonna be kind of wide open. You’ve got North Central, Carney, Norway’s going to be up there, and Stephenson is developing into a good team. Cedarville will always be there, Brimley, and Dollar Bay, too. So it’s going to be competitive. It’s going to a fun year.”

Staff Writer
Keith is a staff writer for Upbeat. He served as the sports editor of the Escanaba Daily Press from 2012-16 and worked as a sports reporter from 2010-12. During his time at the Press, he covered multiple state title runs.