W hen Dane Quigly was tabbed as the Gladstone varsity coach last season there weren’t any nerves or fears. After all, he had made the jump from JV to varsity before, and this time, he was much more prepared. 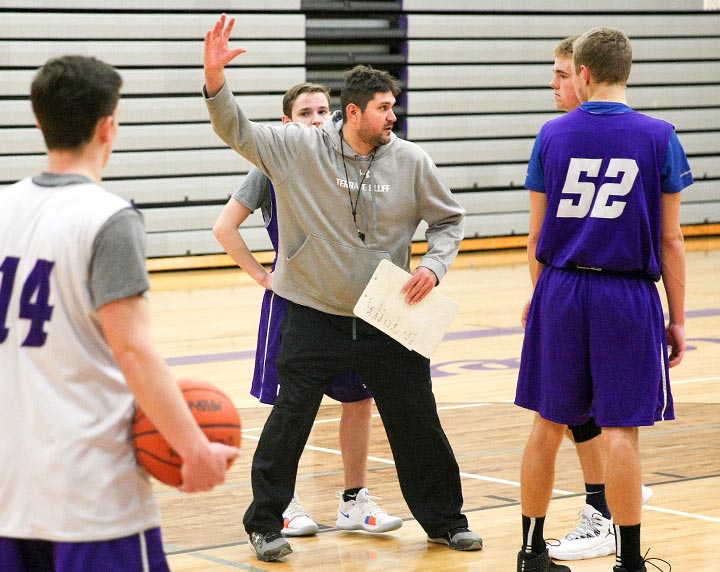 His first experience came years ago when Quigley was fresh out of college. The Northern Michigan grad moved to Minnesota where his wife was finishing her degree at St. Cloud State. Quigley got a teaching job at a little high school in Sandstone, where he began helping with the basketball team.

Suddenly, and randomly, the varsity coach stepped down and a youthful Quigley found himself coaching varsity basketball.

“I had a rough couple of years out there,” he said. “I was only 23, 24, coaching varsity. To be thrown in that mix you have to mature very fast as a person and as a coach.”

He was young and unsure, but one thing was certain: Quigley knew basketball, and he knew it well.

As a three-year varsity player in Bessemer, he had to be smart. Quigley wasn’t a premier athlete, so he could never rely on athleticism to get him out of binds. Instead, he had to know every aspect of the game, backward and forwards, and maybe even upside-down for good measure.

“I’ve always been pretty obsessed with basketball,” he said. “I played as much as I could. But the transition from playing to coaching, I thought it would come easier than it did. It is a little bit difficult when you are managing other people’s kids rather than just playing with your friends. But I think one of the things that helped me was that I was never the most gifted athlete, so I really had to pay attention to detail. When I grew up I had to know what was going on on the court because I wasn’t the most athletic. So that helped me learn the game.”

Quigley also learned how to cultivate a style of play. He reached out to every coach in his conference and picked their brains. He took pieces from coaching clinics and morphed them to fit his methodology and the players he had.

“To develop your own philosophy it is OK to take things from other coaches, but you have to have something that is your own, too,” he said.

Quigley learned who he was as a coach — he liked his teams to play fast-paced, but smart, and to apply defensive pressure all over the court —that helped him make the transition to Gladstone.

He spent five years coaching in Sandpoint, but something was missing. It just didn’t feel like home.

He spent five years coaching in Sandpoint, but something was missing. It just didn’t feel like home.

Then another random event took he and his wife back to the UP. She had never applied, or even looked for a job in the area, but one day the Quigleys got a phone call offering her a speech pathology position in Gladstone.

So Dane Quigley resigned from his teaching position, and they made the move, without really knowing what to expect.

They hadn’t been in Gladstone for more than three days when he he landed a job at the high school.

“The way it worked out it was like I was meant to be here,” Quigley said.

From then on Quigley threw himself into coaching the Braves’ JV squad, but when the varsity job opened up he was more than ready. Still, coaching in Sandpoint isn’t the same as coaching in Gladstone.

“It’s a little different transition,” he said. “Obviously Gladstone is a much bigger program. I don’t even think the school I was at in Minnesota had even 150 kids. It was a small farming community. Here there is a lot more focus, a lot more involvement from the community, so it’s a nice change.”

Quigley had great success in his first season heading up the program — a 16-6 record and a shared GNC title with Marquette. The only disappointment was the way it ended, with a 76-66 loss to Boyne City in the district championship game.

The Braves have the resources to build on last season’s success.

Gladstone lost GNC Player of the Year and All-UP selection Brad Spindler to graduation, but the Braves retain a core of senior players.

Quigley is hoping to take some pressure off Castor by playing him off ball and having senior Quinn Downey take on the point guard duties.

The Braves are also without Second Team All-UP selection Rudy Peterson. The senior, who averaged 12.3 points per game last season, broke his leg playing football. He is expected to return at some point, but the Braves don’t have a time table.

Observers can anticipate Gladstone to play the same style Quigley developed in Sandstone: uptempo basketball. The Braves are undersized, so they will have to use speed and athleticism to tire out opponents.

And expectations are high.