Negaunee’s backcourt of Waterman, Sager will be key to success

T he quick handle, the explosive drives to the lane, the impeccable court vision — it all looks a little too familiar to Dan Waterman.

Now, he loves it.

It’s a cold evening in early November. A light dusting of snow covers the blue and yellow hoops outside the Negaunee middle school gym, and inside, the Miners are hard at work preparing for the upcoming season.

Waterman is putting in offensive sets, out of bounds plays and defensive schemes. And through it all, he has one eye on lanky junior guard Jackson Sager.

Jackson Sager aims to build off his 9.4 points per game last season.

Sager is a near-perfect point guard in Waterman’s eyes — everything the Miners need to bounce back from a less than ideal 8-13 record last season.

When Sager blows by a defender or throws a full-court pass in transition, Waterman smiles and calls out his praise, but years ago, when he saw similar plays, Waterman was anything but happy.

That’s because when Waterman was playing basketball at Michigan Tech, he was often tasked with trying to stop Northern Michigan’s Brandon Sager, Jackson’s dad and the Negaunee girls basketball coach.

Shutting down the older Sager was no easy task, so Waterman knows he has a dangerous weapon at point this season.

“Even the way they move is almost identical,” Waterman said. “Brandon was a great slasher and had the ability to get to the lane and gets guys involved. I see a lot of that in Jackson.”

But last season Sager struggled. The guard averaged 9.4 points a game — not bad for a first-year varsity player, but not good enough for Sager. He wasn’t the player he wanted to be, and he wasn’t the player the Miners needed him to be. Sager kept working on his game in the offseason, and slowly his confidence started to level up with his talent.

“Last year I was kind of timid and always looked to pass first, but this year I am going to look to score more,” he said. “I played scared last year.”

With a season of varsity basketball under his belt, he’s no longer scared. During the offseason, Waterman put more responsibility on Sager, and the junior guard blossomed under the pressure.

“This summer I pushed the play-calling duties onto him,” Waterman said. “He called about 90 percent of our offense and I think he really liked that. We are going to run with that a little bit this year. He has a greater sense of it being his team now. He’s running the show out there.”

Sager has all the makings of a premier point guard. He understands the game and sees things developing on the court long before they happen. Plus, Waterman called him the best ball handler he has ever seen in his 20 years of coaching.

But at times Sager is still a reluctant scorer.

As the Miners run through offensive sets Sager drives to the lane and dumps a pass to a shooter on the baseline.

“But your first look is to score, right Jack?” Waterman calls out.

Sager nods and runs the set again, this time pulling up in the lane for a jump shot.

Sager is still learning what it means to be a scorer, but his teammate in the backcourt, Jason Waterman, doesn’t need to learn. He’s the definition of a scorer. 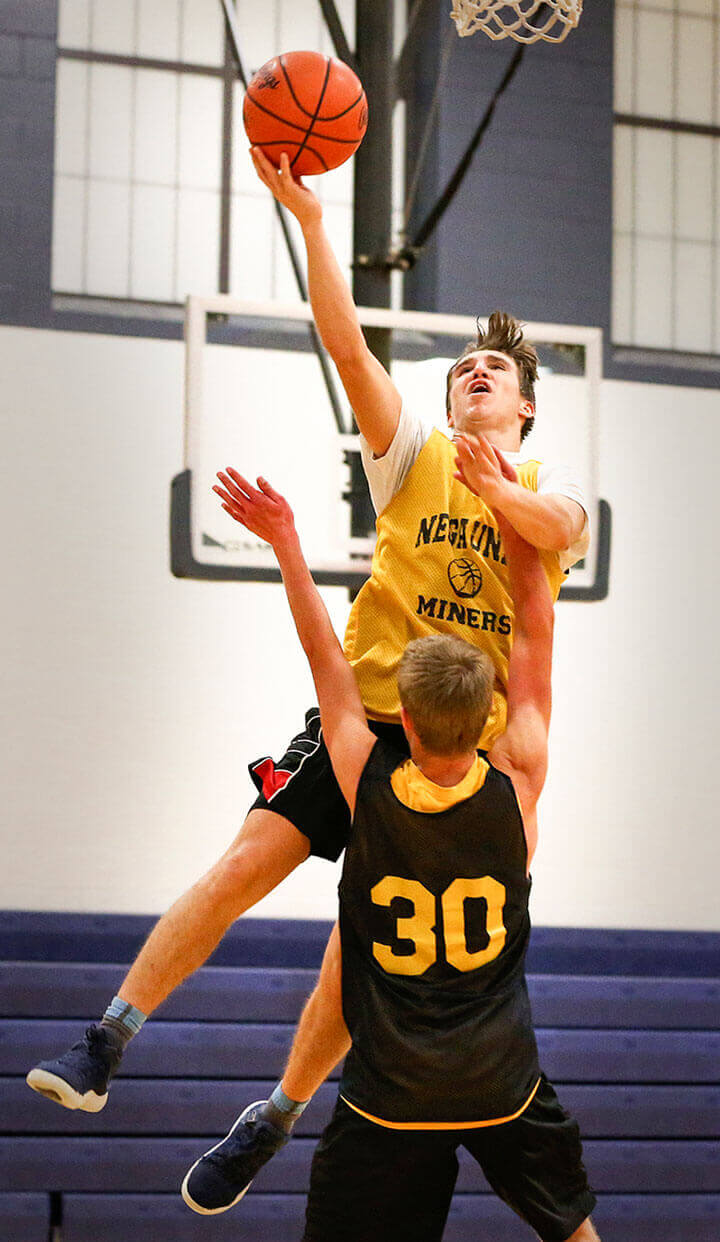 As Negaunee scrimmages to practice new plays and sets, Jason starts things off with ten points in a row: Two corner 3s and two mid-range jumpers. He will take his points wherever he can get them, but the self-described shooter is happy to float around the 3-point line.

And his point guard knows where to find him.

“Every time I drive I know he will be waiting on the 3-point line,” Sager said.

When Jason hoists up a shot, it looks natural and effortless — that’s what happens when you put up 500 shots a day.

His numbers from last season reflect that.

The All-UP Second Team member averaged 17 points per game and shot 46 percent from behind the arc.

He was certainly dominant, but the Miners weren’t. And this season Jason is looking forward to having a more consistent scoring partner.

After two seasons, opponents know who Jason is. They know he can shoot and they know he can score. Long gone are his days of sneaking under the radar, as teams plan their defensive schemes around him.

But if Sager has the breakout year the Miners are hoping for, stopping Jason won’t be enough.

“This being my third year, everyone is going to know who I am now, everyone knew who I was last year,” Jason said. “I’m excited about the fact that they can’t double-team me because they have to guard Jack. And if I’m not having a big game he can take over.”

Sometimes, Dan Waterman can’t help but laugh when he watches Sager running the point because it’s like a flashback to playing against his father.

When it comes to Negaunee’s other father-son duo, things are a bit different. The two look crazy alike facially, but their games are crazy different.

Jason, Dan admits, is a much better shooter than he ever was. But Dan was a better defender. Defense is a point of emphasis for Jason this season, and Sager helps with that, too.

“Me being a third-year player on varsity, I have seen some stuff,” Jason said. “I think out of all the guards I’ve played with on varsity, I think Jackson is the best ballhandler. He can go from here to there in the blink of an eye. If you want to become a better defensive player, guard Jackson and just try and keep up with him.”

Jason would much rather have Sager on his team, rather than be tasked with shutting him down.

As the Miners finish up their practice with another scrimmage, Sager takes a quick dribble past his defender into the line. Waterman slides into an open space on the 3-point line.

The play doesn’t call for celebration. Instead, the two lock eyes for just a moment before running back on defense.

If Sager and Waterman get their way, as the season progresses, they will execute the same play again, and again and again.