Koski, Leece prepare to bring Westwood to next level

T essa Leece and Madelyn Koski don’t have to talk or even look at each other to know what the other is thinking. Their bond is so strong, Leece says, that the two have telepathy. The phenomena of assessing someone’s thoughts and feelings without needing any cues is commonly associated with twins, but Leece and Koski aren’t twins. They aren’t even sisters, but they might as well be.

“We know each other so well, that we don’t need to communicate,” Leece said. “I don’t even know how to explain it, but our minds just work as one, in unison.”

Koski and Leece have been best friends since they were 3-years old. They’ve spent the last 13 years swimming at Koski’s grandma’s house, eating ice cream at Leece’s family camp, taking side-by-side rides, and playing basketball — lots and lots of basketball. 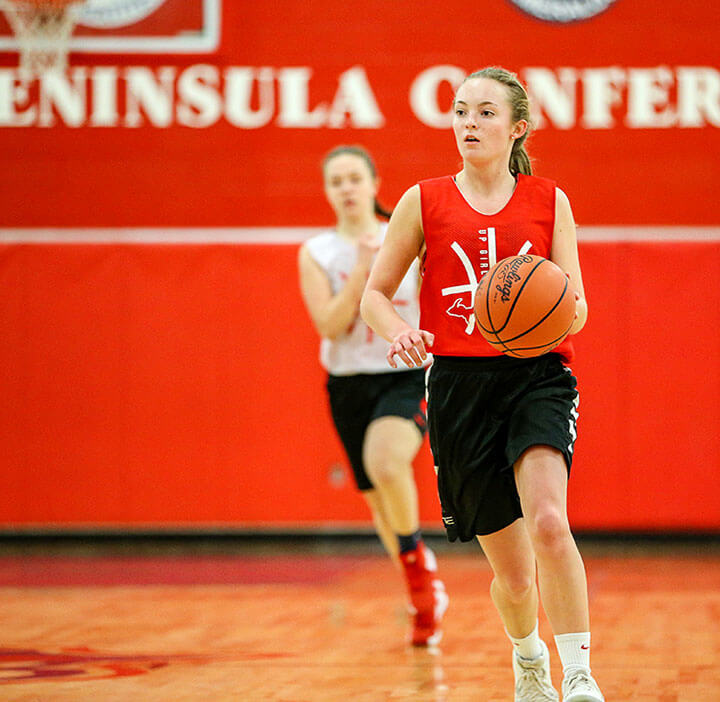 “Those two girls put more time in the gym than anyone. I can say that with confidence.” Westwood coach Kurt Corcoran said. “Out of 365 days, they might take Thanksgiving, Easter and Christmas off, but they get in the gym 99 percent of the time.”

Leece and Koski’s connection was key for Westwood last season, as the Patriots finished with a 15-7 record. They are a dynamic backcourt duo, with Koski averaging 14.7 points per game and Leece contributing 11.3. Last season they scored 55 percent of the team’s points.

Leece is regarded as one of the best shooters in the UP, knocking down 42 percent of her attempts from 3 last season and finishing second in the Michigan Top Shooters Challenge two years in a row. The junior has a balanced offensive presence with the ability to slash to the basket or shoot from long-range.

Koski is a capable scorer herself, possessing the same ability to shoot or attack the basket, with an incredible knack for free throws — shooting 87 percent from the line last season. Recently she hit 132 in a row at practice. She also runs the Patriot’s attack, offensively and defensively as the team’s point guard.

Essentially, Leece and Koski do more than their fair share for the Patriots.

“You can call it Mady and Tessa’s team,” Corcoran said. “They’ve earned it. They’ve put in the work.”

And after two years on varsity, the duo is finally feeling comfortable with that.

“They were both pulled up as freshmen when they were not ready to be on varsity, but we were in a position where we needed them,” Corcoran said. “We had no other choice. So when you are a 14-year-old girl playing with 18-year-old girls, that is a big difference. They knew their roles and they kept quiet. All of the girls on the team knew how capable they were, but they weren’t ready to be vocal leaders. Even as sophomores it was difficult for them trying to be leaders. This year this is their team.”

That comes with a lot of responsibility, but more than anything, Leece and Koski are excited. For the last two seasons, they have missed playing with their friends who were on the JV team while Leece and Koski cemented their places on the varsity squad.

Now, everyone is playing at the same level, and the Patriots don’t have to worry about developing team chemistry — it’s already in place and has been since the third grade when the young Patriots started playing on a travel team called “Swoosh.”

These days they are a little older, and certainly better at basketball, but not much else has changed. The long-standing friendships made Westwood’s 8 a.m. summer workouts a little more bearable. Three days a week the Patriots hit the gym for weights followed by on-court drills and scrimmages. 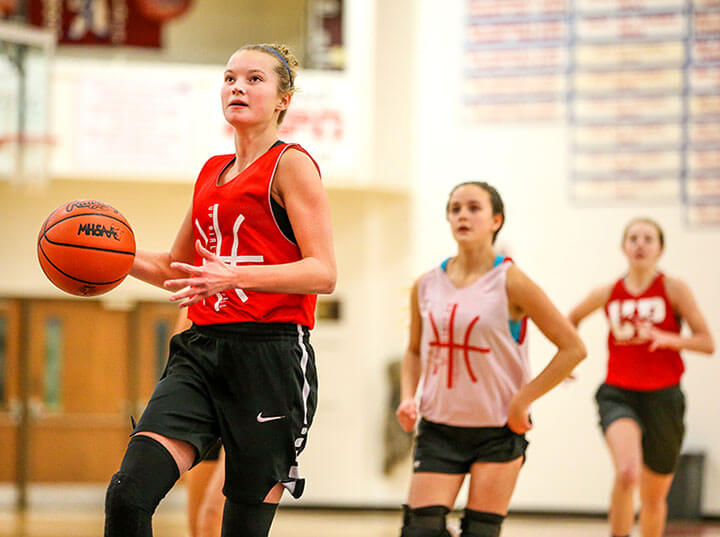 And they talked a lot about last season, specifically the disappointments that came with seven losses. Three of those losses were by four points or less, and two more were by fewer than 10. Ultimately, every game was close enough that it could have and sometimes should have, ended in victory.

“In the offseason, we talked a lot about that, and when we were working out we focused on the close games,” Koski said. “If we push harder we will be able to win those close games. It came down to free throws and the little things at the end.”

This season, in order to turn those losses into wins, Corcoran is demanding perfection on defense — just not right away.

“The points will come, but we aren’t very big, we aren’t very fast, and we aren’t very strong,” he said. “We have some good shooters, so now we are in the process of learning how to play in-your-face, shutdown defense. Some of these girls who are new to the varsity level; it is going to take some time.

Westwood is also in the process of finding an on-court leader, one who can be an extension of Corcoran. Koski is developing, but she’s learning too. At times the junior, who said she views herself as a “cheery leader” is a little too nice, Corcoran said.

“Mady is very careful, and she doesn’t ever tear anyone down, she doesn’t want to make anyone mad, but part of being a leader is not being afraid to make someone mad,” he said. “Sometimes you are going to have to tell people things they don’t want to hear.”
She has the respect of her teammates, he said, so in time Corcoran believes Koski will fill Westwood’s leadership void.

Westwood has potential not only this season but next season as well. The Patriots don’t have a single senior on their roster, so the entire team will return next year.

It’s an exciting and refreshing situation for a coach to be in, not having to scramble to replace missing pieces, but Corcoran doesn’t want it coming too fast. The sixth-grade teacher has waited since Leece and Koski were in middle school for the duo to rise to the varsity ranks.

“They’ve always been my two little guards that I’ve always been looking forward to having on my team,” he said. “I don’t want to wish it away too fast because I waited so long to get them. I’ve had them on my team for two years already; I get two more years and that is exciting.”