W e all feel emotional pain differently. Some get over the feeling quickly, some take a slow and steady approach, and others allow that pain to make a home inside them; motivating, influencing and dictating everything they do.

When Marcus Johnson was 14 he watched his older brother Kyle lose his last high school game — a devastating 51-46 defeat at the hands of Norway in the playoffs.

It hurt him. But it was only second-hand pain. And Marcus wondered how hard would it hit if he was at the center, the protagonist in a gut-wrenching loss? He never wanted to find out.

He watched as his brother lay on the court in a pile of heartbreak, and Marcus walked over and picked him up. And when he did, he picked up his brother’s baggage and emotions from that game, that season, and made them his own.

And as he helped Kyle off the court, Marcus made a vow to himself: This won’t happen to me. I’ll make sure of it. 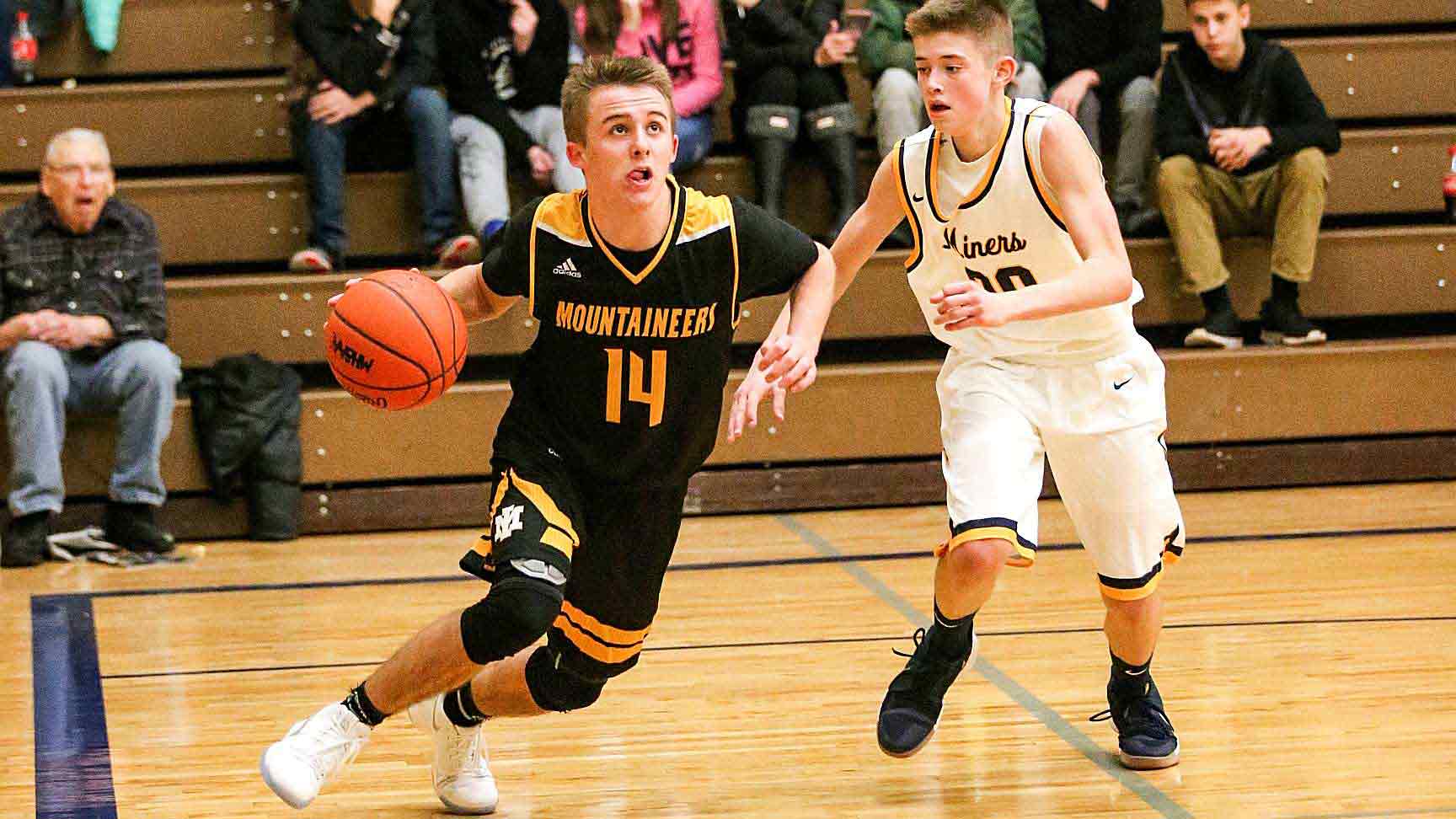 Most people see the competitive version of Marcus Johnson, but there's more to him than that.

In a small community, everyone has their opinions, and everyone is entitled to those opinions. But we all only see a snapshot of the truth, and our views are diluted by perceptions and partiality.

Marcus doesn’t always offer up the best snapshot. He knows it, his dad knows it and all of Iron Mountain knows it.

When he plays, be it basketball or football — he serves as Iron Mountain’s quarterback — Marcus is overtaken with competitive drive, and his emotions are free-flowing. The problem is, those emotions are like a pendulum swinging back and forth: one side is the highest of highs, and one is the lowest of lows. Marcus feels both of those, and he expresses both of those.

He often can’t seem to find a middle ground, and people don’t always like that.

But Marcus isn’t blind to how he is perceived, in fact, he is entirely self-aware. And he’s working on it.

“I have to work on keeping it in the middle,” he said. “Not getting too high and not getting too low. That was kind of my motto in football this year and that kind of helped to keep me calm. It helps me stay focused and not get too far ahead of myself in a game, and then get too low and start thinking too much about missing shots. I just have to get past that.”

Most teenagers are misunderstood in some capacity or another, and Marcus is no exception. About the only person who really understands him can be found on the sidelines every game day: his coach and father, Bucky Johnson.

Still, people like to offer their opinions. Sometimes, Bucky says, they have valid points, and sometimes, they are clueless.

“I’ve never coached a kid that is as tough of a competitor or wants to win as badly as Marcus. Ever,” he said. “I’ve had kids that are competitive, but losing is not something that sits very well with Marcus. Sometimes he doesn’t show that well or handle it well, and sometimes other kids and other people don’t understand that, but I understand it. His family understands it, and that is all that really matters.”

Still, people like to offer their opinions. Sometimes, Bucky says, they have valid points, and sometimes, they are clueless.

Bucky understands Marcus because as his father, he sees the whole picture.

He watched as Marcus grew up playing basketball on a hoop in their house, not taking it easy on anybody, not even his grandmas. He beat them every time. And if someone is willing to take it to their dear old gran, you can imagine what they would do to an actual opponent.

Eventually, Marcus’ mom got tired of the hoop being indoors — who can blame her?— so Marcus, Kyle and Bucky had to sneak it around.

“My wife made me take it down, but we used to hide it on her,” Bucky said laughing. 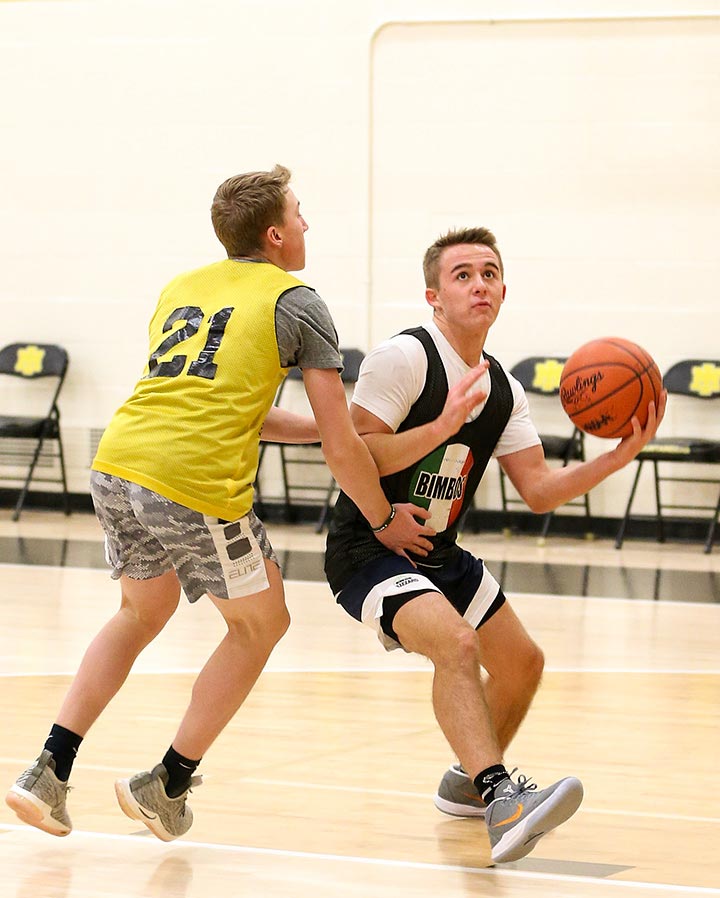 Years later he watched as a 12-year-old Marcus hit a grand slam in a Little League district championship. Then he came in with a tired arm and pitched the last innings to secure a victory. In that moment, Bucky realized just how strong his son’s will to win was.

Now Bucky sees how an undersized Marcus — 5-10 with shoes (maybe) and 5-9 without — works tirelessly at his game, constantly finding new ways to score and improve overall.

This summer, in addition to playing AAU basketball, Marcus worked out with Carney-Nadeau’s Jake Polfus. The coach taught him about creating space and how to choose when and where to attack.

“It is just about picking your spots, basically,” Marcus said. “I mean, yeah, you aren’t going to be able to go in against a kid that is 6-5 and finish over him, but you can shoot the floater over him or take the jump shot.”

His work ethic, coupled with natural talent, has paid off. Last season, as a sophomore, Marcus scored 22.9 points, dished out 5 assists, grabbed 3.8 rebounds and snagged 2.2 steals per game. His numbers earned the point guard the Class ABC Player of the Year award and All-UP Dream Team honors.

This season Marcus is trying not to do too much. His competitive nature and fiery personality tend to make Marcus feel like the world is on his shoulders, but with the Mountaineers, that isn’t the case. The team was 23-2 last season, eventually losing in the Class C quarterfinals. Iron Mountain returns all of its starters from that team, including sophomore Foster Wonders, who put up monster numbers of his own —19.1 points and 6.3 rebounds a game.

“I put a little too much pressure on myself,” Marcus said. “I feel like sometimes I will miss one shot and get too mad about it and I need to take the pressure off myself. Sometimes I try and do too much, but we don’t need one person to do everything. We’ve got the size, we’ve got the strength, we’ve got the speed, so I can tone it down.” 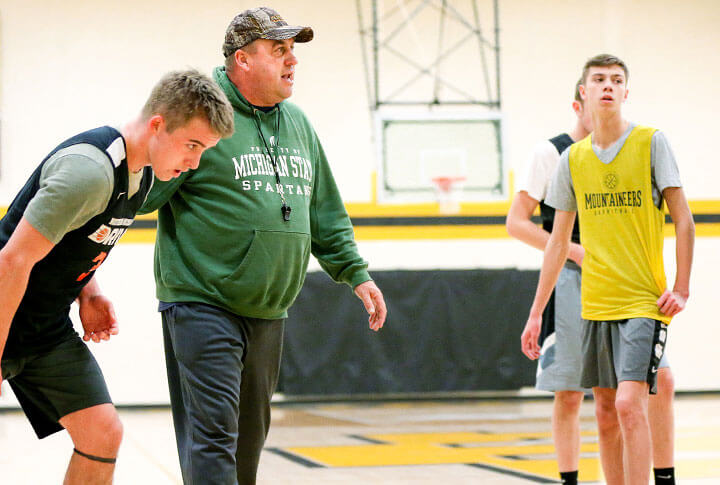 Bucky has seen everything that Marcus has done and been through. When Kyle lost that last game of his career, he saw how it affected Marcus. It wasn’t just a little brother upset for his sibling. He felt the loss like it was his own because someday it could be, and Marcus didn’t want that. That’s why he thinks about that game so often, using it as motivation.

That’s one of the many reasons why he is so competitive. He doesn’t just play for himself.

“That game kind of sticks with me in my head for sure because I do it for [Kyle] Also for my grandpa Rick who has been coaching for 52 years, and my grandpa Harvey, my dad’s dad. Basically, I do it for all of them,” Marcus said.

So every time he steps on the court, Marcus feels the emotions of four people. He has to win for them.

He wants to win for Bucky too, but the two can clash about how best to go about getting that win.

“When you have two guys that compete and have such a passion for it, he thinks sometimes he is the coach and there is a fine line there,” Bucky said. “I get after him more than anybody on the team; there is no doubt about that. He doesn’t react the best way all the time, but I understand that. I don’t really care what other people think. That is a work in progress and is probably one of the reasons Marcus has a target on his back, but we understand that and we work on it. If you understand Marcus and who he is, you understand why he reacts the way he does sometimes.”

And if you understand Bucky, their disagreements make even more sense.

“We are so alike, and they say opposites attract, but we aren’t opposite, we are the same thing,” Marcus said with a smile.”So we butt heads sometimes, but in the end, we both want the same thing, which is to win.”

And Marcus? He doesn’t care what you think.

At the end of the day, the person who needs to understand Marcus best is Bucky. He’s his coach, his dad, and the person who takes Marcus home after a tough loss or an exciting win.

And then, he gets to see Marcus shed his hard exterior.

Marcus is his most authentic self with his family. He can be kind-hearted and affectionate, things he certainly can’t show on the court. He can tell his parents he loves them, and joke with his grandparents.

“Marcus is business, all business, but deep down inside he is about as kind of a person as there is,” Bucky said. “Sometimes he doesn’t portray that on the court or on the field. He has a hard outer shell but inside he is only a 16-year-old kid who loves his family.”

But, it’s up to the individual to see him however they choose.

And Marcus? He doesn’t care what you think.

“It doesn’t bug me, it’s whatever. I’ve always been looked at like that. I’m kind of under a big magnifying glass, and everything I do people are going to be on it, so I have to just let it go and block it out.”