Y ou notice Tucker Taylor when he steps onto a basketball court. His chiseled 6-foot-4, 225-pound frame is akin to a college middle linebacker. Then you see him move — there’s an explosive first step and a quick-twitch spring when he elevates into the air.

It’s not hyperbole to suggest that no other player this season will possess the equivalence of Tucker’s combination of strength and athleticism.

“As a coach, you just really hope you get kids like Tucker at some point, because not everyone does,” Gwinn coach Jim Finkbeiner said. “You can’t coach that size and strength and the drive that he has.” 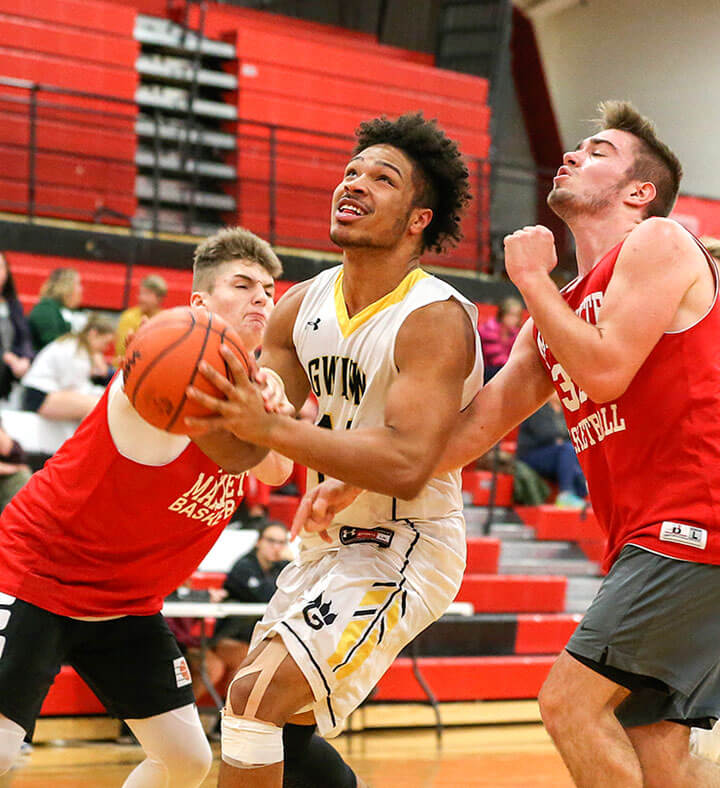 Scheming around Taylor’s athletic talents is nothing new for Gwinn’s opponents, but those game plans may become outdated if what Taylor flashed during the scrimmage at Marquette becomes a regular occurrence this season.

In one sequence, Taylor hauled down a defensive rebound and pushed the ball up the court. Two Marquette defenders converged, but without breaking stride, Taylor dribbled behind his back and continued his pursuit to the basket before taking two long strides as he rose up for a layup. With one defender hanging on his right arm and the other running into his body, Taylor drew the foul, earning two shots at the line.

“If you have a guy his size who can handle the ball in the open court, that’s a pretty good weapon to have,” Finkbeiner said. “Who is going to be able to step in? He’s as fast as anybody on the floor, even with his size.”

The strength he showcased was of no surprise, but his ability to lead the break and maneuver around defenders with his ballhandling ability was something he was not able to consistently do last season. It was brief, but it was a glimpse into what a multidimensional Tucker Taylor could look like in 2018-19.

“It feels great that the work paid off,” Taylor said. “When I’m able to do something I wasn’t able to do, it just makes me more versatile and more of a threat.”

On the boys side, Taylor is just one of two returnees in the UP who averaged a double-double last season, putting up 19 points and 11 rebounds a night (Pickford’s Nick Edington, who averaged 15 points and 11 rebounds, was the other). And while those numbers were good enough for Taylor to receive Class ABC All-UP Second Team, in a way, his game was more limited than what he wanted. He was a straight-line driver who thrived on bully ball inside the paint.

For a self-described lifetime competitor, that wasn’t enough for him. To get an idea of Taylor’s competitive mentality, he once went back-and-forth in a fierce pickup game with teammate Austin Forbes. On separate teams, Taylor would come down and make a shot, then Forbes would answer with a jumper of his own. This went on and on, with neither willing to cede to the other. Eventually, it got so heated that the two didn’t talk to each other for three days. 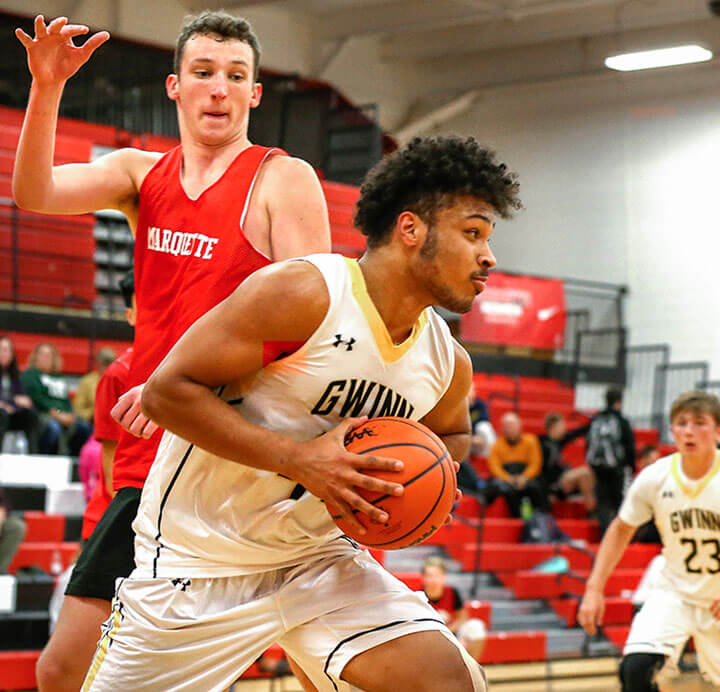 So it would come as no shock that Taylor would want to expand on his game during this past offseason. Chances are, you saw him with a basketball. He took one wherever he went, dribbling to his friends’ house before messing around with the ball and tossing it back and forth when he arrived.

“I just didn’t want to stop. I just want to keep going and bettering myself,” Taylor said. “I was always dribbling a ball. Everywhere I went, I was dribbling.”

He was shooting, too. Depending on the amount of time he had, he would get up between 100-200 shots when he worked out on the shooting machine. The improved shooting touch was also evident against Marquette. On one post touch from the right block, he turned over his left shoulder and connected on a 13-foot jumper along the baseline. Sure, he probably could have lowered his head into the defender and powered up for a layup after he caught the ball, but a mid-range jumper off a post-up is just another thing for defenses to consider this season.

“Tucker’s becoming to be more well-rounded,” Finkbeiner said. “He’s developed a soft inside jumper, and he’s developed some post moves instead of being that bull to the basket, which no one could stop because he’s so physical.

“He’s also a good passer and finds guys open when he needs to. If they send a double team, he’s going to find the open guy.”

With a more advanced skillset to go with his overwhelming athletic talents, it’s hard not to contemplate Taylor’s potential this season. The points and rebounds will likely increase, and his name will assuredly come up in late March when the Upper Peninsula Sportswriters and Sportscasters Association discusses the 2018-19 Dream Team. But it’s not accolades or stats that motivate Taylor, instead, it goes much deeper.

“I want the kids that are in the grades below me to look at me and think of me as someone they want to be when they’re older,” he said. “I want them to have the drive I had.”