T he feet move quickly. In, out, in, out: barely touching the ground as they complete a ladder drill designed to improve athletes’ quickness. Then the feet shuffle along the 3-point line and curl around a metal chair. They plant at the free throw line, creating a base for the perfect jump shot. The ball falls through the hoop and a line of North Central basketball players cheer. Strangely enough, the feet aren’t wearing Jordans or Nikes. Not even Adidas. Instead, they are clad in black dress shoes: not ideal for basketball drills, and attached to a body wearing khaki pants, a black belt and a black and red polo.

Mike Malone doesn’t need athletic clothes to demonstrate his homemade drills to the Jets. His extreme energy propels him through as he shouts instructions to his players. 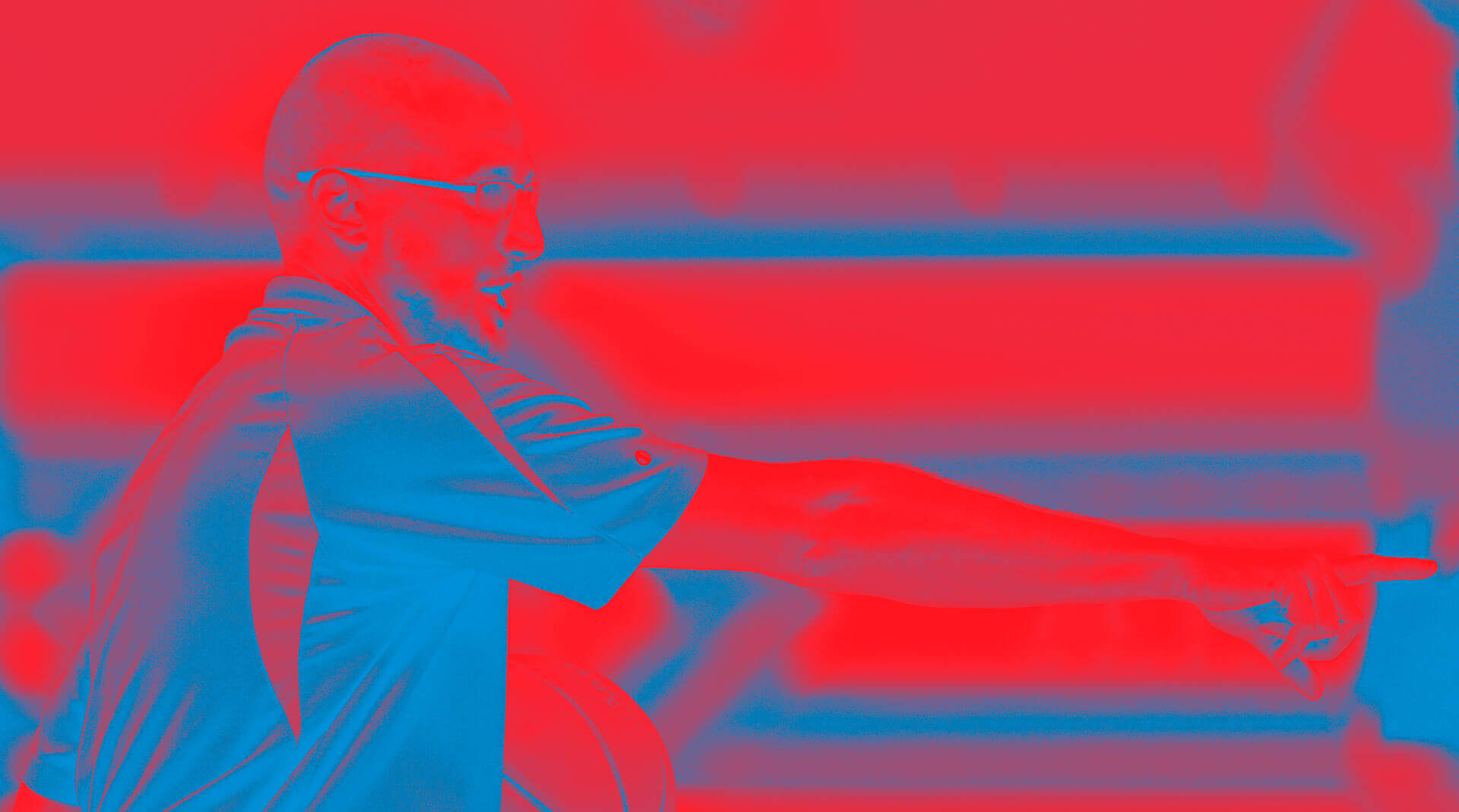 Mike Malone directs a drill during a practice in Powers on Friday.

His approach is unusual but effective. Each player listens intently, eager to execute drills for their animated coach.

Malone will need that energy, and that focus this season as he embarks on his first year as the Jets head coach.

At the end of practice, Malone calls his players into a huddle. They’ve just finished an intense batch of cardio exercises, and while they breathe heavily watching the sweat drip off one another, Malone commends them for a job well done.

Above him, banners hang as a reminder of the legacy that came before Malone.

The first-year coach is taking over for Adam Mercier, who coached the Jets to three Class D state titles in a row, from 2015-17.

No one is more familiar with that legacy than Malone. He was on staff as the JV coach for two of those state titles, and the North Central grad watched the other as a fan.

He’s ready, but less than a year ago, he didn’t want to be here.

“I told coach Mercier many times when I was coaching JV, I’ll never coach varsity because I saw the constant stress he was under,” Malone said. “I did not want to put that hat on at all.” 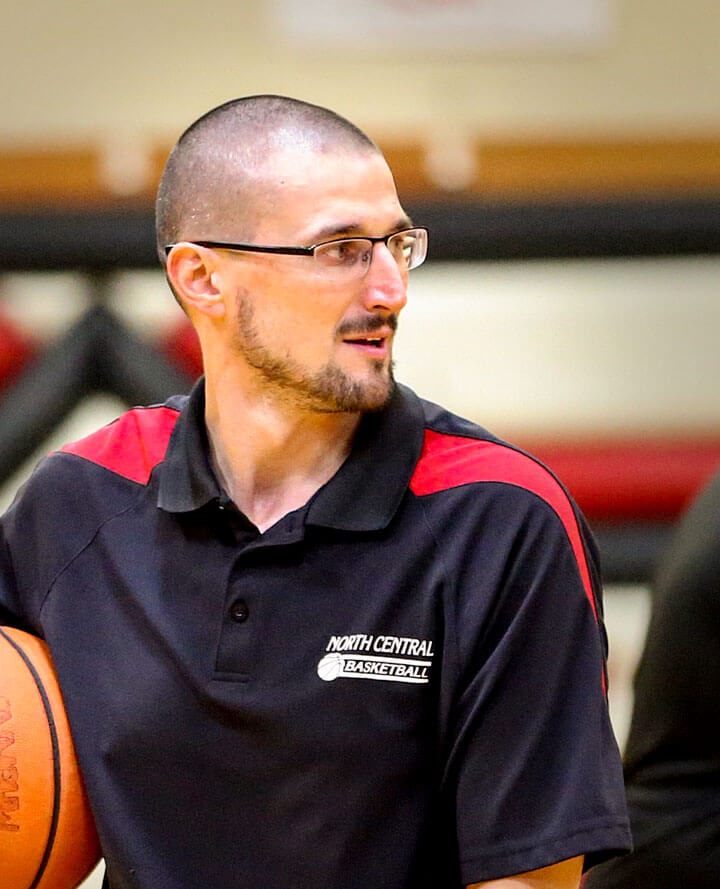 Malone served as an assistant to Adam Mercier during two of the Jets' state titles.

Now, as the 2018-19 season quickly approaches, Malone is not only wearing the hat, he’s wearing it like it was made for him.

“It’s a godsend,’ he said of coaching North Central. “I bleed red and black so this is great. I absolutely love it.”

The transition for assistant and JV coach to head coach has been a tough one so far, but Malone already has the basics down.

He certainly knows how to plan a practice.

Every drill the Jets do is created by Malone specifically for his team. He soaks up all the drills he can find online from schools like Michigan State — specifically seeking out teams that focus on fundamental basketball. He takes bits and pieces from those drills and adds in strength training and agility, targeting jump muscles core and overall strength.

He’s got his own philosophy too — one that differs from Mercier, but still encapsulates everything North Central has been about for the last decade.

“He is a defensive-minded coach and he really focuses on rebounding,” Mercier said. “That is where his strengths are at and I think he is really going to be successful with lesser talented teams because of that notion. He might not have the talent that I had in the past, just from a player aspect, but he is going to have the right mindset to get those teams at a high level. He is going to fight tooth and nail for everything they are going to get.”

And those little quirks that every seasoned coach develops? Malone has those too.

“There is one specific rule that I have,” he said. “I do not allow our players to look at points. They will not be checking anything in the offensive category. It will be how many turnovers they had and how many missed boxouts, and collectively, did we get the W.”

Malone has all the makings of a varsity coach, and as someone deeply involved with the Jets program for many years, he seems an obvious choice for the head coaching gig, but the decision wasn’t easy. Malone almost didn’t even apply.

A year ago he decided to step away from his JV coaching position in order to spend more time with his young family. Malone couldn’t remove himself completely, still watching games and helping with open gyms, but he thought heading up the JV team was too much of a time commitment. So when Mercier stepped down, coaching varsity didn’t seem a practical move for Malone. 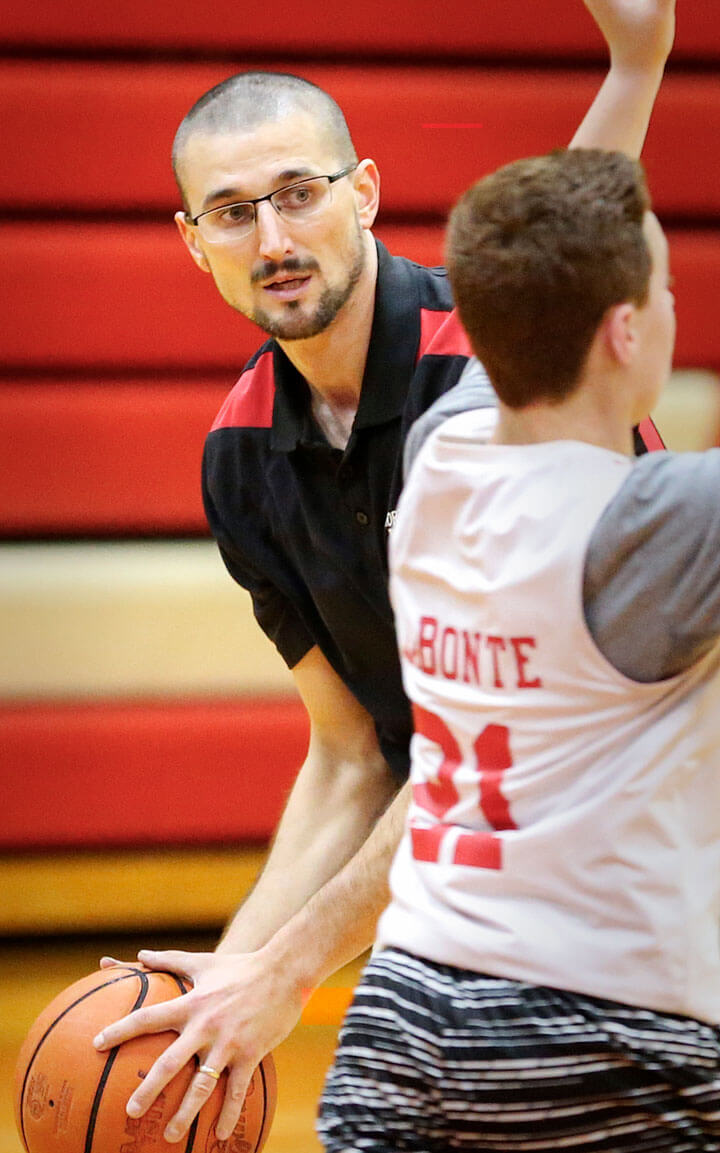 But he was determined to find someone who would fit North Central’s style.

The community is full of tight-knit alumni, with their eyes firmly fixed on the Jets. Malone asked around town, and no one was interested in taking on the pressure and commitment of being the varsity coach.

So Malone was left with a choice: step up and fill the void, or risk someone from the outside coming in without the proper understanding of Jets basketball.

Malone spent countless free moments debating what to do, but what he really needed was family support.

“After I quit coaching for the year my oldest son asked why I quit coaching and I said ‘Well, I wanted to spend more time with you.’ And then he said, ‘Well I prefer to be at the gym more.’ ”

It was settled. Malone submitted his application.

Now, as he wraps up his first days of practice as a varsity coach, Malone knows he’s in a tough spot.

“It is very different (from JV),” he said. “A lot more time consuming and a lot more, I don’t want to say pressure, but it is almost a given that you are under a microscope constantly. I am following one of the greatest coaches to ever coach the game. I learned pretty much everything I teach from him, so it will be big shoes to fill.”

As Malone chats with players in the hall, answering questions and explaining concepts, the dress shoes on his feet seem to be filled just fine.