After dramatic offseason, Negaunee’s Waterman sets out to change

D an Waterman doesn’t like what he sees, but it’s what he can’t hear that bothers him most. He stops the intrasquad scrimmage and his deep voice bellows out across the Negaunee middle school gym.

“The biggest difference between college basketball and high school is the communication on defense,” he says. “If you don’t talk at the college level, you don’t play.”

Past Negaunee squads had the benefit of Waterman’s boisterous instruction from the sideline. It helped his units get into offensive sets, made up for the lack of communication on the defensive end and guided his teams to a 65-24 record during the last four seasons, including a quarterfinal appearance in 2017. But some in the Negaunee community didn’t see it that way. They didn’t see coaching, they saw “sideline antics,” and to them, Waterman’s intense demeanor didn’t fit in this high school sports society where everyone is under a microscope for political correctness. What ensued this past spring was a tumultuous offseason that included the two most difficult weeks in Waterman’s coaching career. He was fired, then rehired after an outpouring of support from parents, former players and members of the community. The whole process made Dan Waterman reflect, and now with a second chance, he’s decided to reform as a coach after 20 years.

“If I’m going to sit and be quieter on the sideline, then it’s going to be on you guys to talk to each other,” he continued. 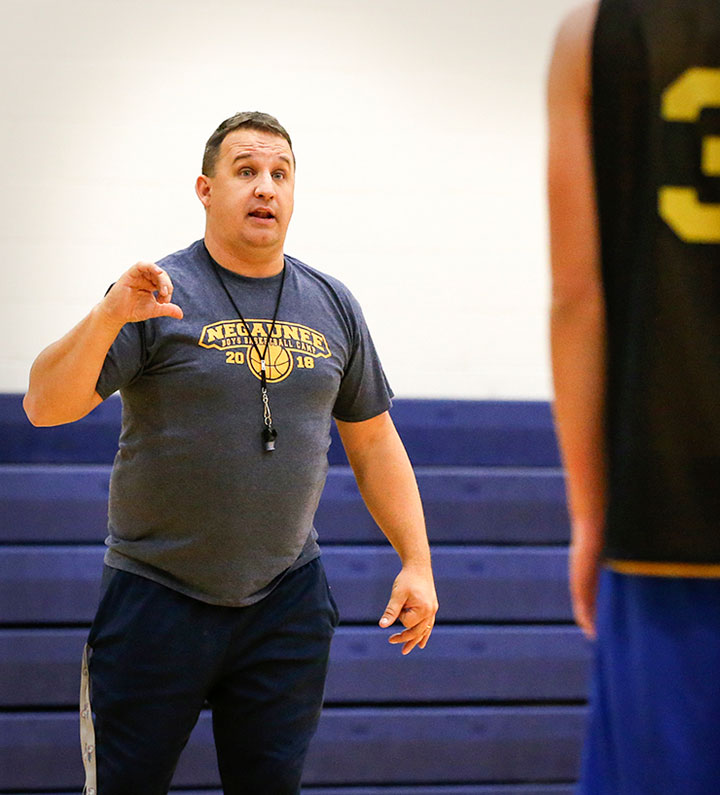 Dan Waterman is back at Negaunee for his fifth season as head coach after being fired and then rehired this past offseason.

Jason Waterman can still remember coming home from school and seeing the disappointment in his father’s eyes when Dan got the news he was being let go. He had spent his life preparing and looking forward to playing for his dad, as Dan relished the opportunity to coach his son. And suddenly, it was gone.

“I was in shock,” Jason said. “As one of the players, you feel like it’s partly your fault. Overall, it’s a hard thing to handle. That’s my dad, you know? He lost one of his jobs, and he loves it very much. It was a shame to think that it was going to be the end of it right there.”

Dan recalls that first conversation with Jason after he came home as “one of the most difficult conversations I’ve had in my life.” As much as he had waited to coach a team with Jason on it, his immediate concern was for his son, who had trained his entire life with the motivation of being able to play for his father.

“With the amount of time and dedication he put in, I was more worried about how he was going to deal with it than myself,” Dan said. “He was very emotional about it, and there were some hurt feelings.

“My wife and I just tried to advise him to be calm and that things will work out for the best. Fortunately for us and our family, it did work out. It got resolved and we were able to move forward and stay in the same place, and we’re very happy about that.”

On April 24 at the Negaunee school board meeting, close to 50 people — many knowing Waterman in different capacities — showed up to back Waterman. There were the parents of kids in Waterman’s Saturday morning basketball camps. An aid from the elementary school highlighted Waterman’s character by how he interacts with the young kids. Past Munising players attested to his work ethic. Former Negaunee Miner Ben Luke wrote a letter of support for Waterman to the board that was read by his parents.

“For those people to stand up and make their voices heard was very gratifying,” Dan said. “You know your hard work is not for nothing when people are willing to do that. They didn’t have to do that. They had nothing to gain by doing that, so I will be grateful to them forever.”

And then there was Jason. The All-UP Class ABC Second Team guard spoke out about what it meant to play for his dad and described the level of commitment he witnessed firsthand from Dan.

“I just remember my dad telling me not to feel obligated to go up and say something,” Jason said. “But he put too much into it for me and my career. How can I sit there and be silent? I had to say something.

“After it was announced he was rehired, right then and there, I knew that my junior year had to be over the moon. Us as a team, we had to be more physical, meaner and nastier. Just because he got rehired, we don’t want to give them any reason to keep him away again.”

"For those people to stand up and make their voices heard was very gratifying. You know your hard work is not for nothing when people are willing to do that."

Soon the question of what exactly the new Dan Waterman looks like can be answered. Negaunee opens up its season at Calumet on Nov. 27 before hosting preseason No. 1 Iron Mountain on Friday. Both will be challenging matchups, and the home opener against one of the UP’s premier teams on a Friday night figures to have a charged up atmosphere. Early on, Dan’s new calm disposition is set to be tested.

“I’m an intense guy; it’s why I was successful as a player, and I’m that way as a coach,” said Dan, who played at Michigan Tech. “I’ve always admired guys who can sit on the bench and look so calm and unbothered. I’m going to try to be less vocal and less demonstrative on the sidelines because I do want the focus to be on the kids, and I don’t want the focus to be on me, and sometimes people are concentrating on what I’m doing and not recognizing all the great things our kids are doing. I’m trying to step back and have our kids step forward and take more ownership in their experience.”

A local example of the coaching demeanor Dan is striving for would resemble the stoic Jeff Twardzik who led the Calumet girls to a state title in 2015. Twardzik was known to spend his time on the bench with his hand over his mouth and quietly observing. Phil Jackson is a more well-known coach who has had success with an impassive attitude and won 11 NBA titles. So yes, coaching in this laid-back style can have positive outcomes, and Dan is hoping to make it work for him.

Still, he acknowledges the challenges of attempting to rewire his mannerisms after 20 years of coaching. He spent this past summer practicing his new mild coaching style at the two team camps Negaunee attended. Of the 18 games, he says he was able to stay composed and calm for 15 of them. The other three? “There were three games that got really competitive and then I got up and was more vocal than what I wanted to be,” he said.

Regardless, it was a start. The start of a coach willingly changing his ways to take attention off himself for what he hopes will better the team, and a father doing what he has to do to fulfill his kid’s childhood dream of having him as a coach. In all likelihood, the team camp was a precursor of what Dan’s coaching style will be: calm, but perhaps a flash of his old ways when he wants to call out a play, or when a missed call goes against his guys. While reflecting about the possibilities of how the season will play out, Dan recognizes the challenge ahead of him.

“It’s going to be difficult,” he said. “It’s going to be a constant process for me. I have no doubt that I’m going to have good games and bad games like players do, but I’m never going to stop working at it because this job is important to me, and I want to give the kids the best experience they can have.”